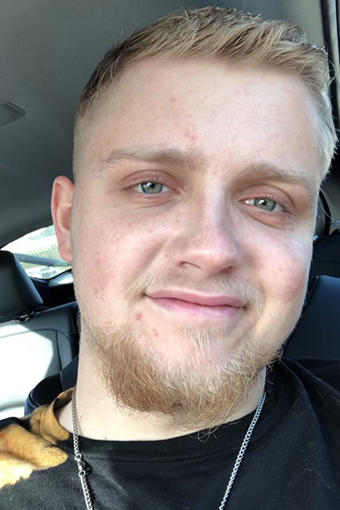 Austin James Onken was born July 28, 1999, in New Hampton, IA, the son of Sara Dreckman and Shawn Howard. He graduated from New Hampton High School in 2017, after high school went on to college for law enforcement. In 2019, Austin met his future wife Veronica, and they were married on November 3, 2020. He loved spending time with his wife Veronica whether it was ice fishing trips or watching their TV shows together and time with his son Aldous teaching him all about life, love, and video games. Austin always enjoyed what time they had. He enjoyed spending time with his two birds, and his ever - loyal felines Mufasa and Pookie, playing apex, going to the races, and listening to his favorite artists Prof and Madchild, Austin will be remembered for his quick wit and humor and infectious smile, his love and patience for all animals, and his devotion to his family. He will be greatly missed.

Survivors include his wife Veronica Onken and their son Aldous, both of Waukon; his parents Sara and Chris Onken, both of New Hampton; his father Shawn Howard; his siblings: Nick (Cheyanne Crow) Dreckman of Cedar Rapids; Jon Dreckman and Samantha Onken both of New Hampton; his grandma Rebecca Howard; two uncle’s Shane (Kayla) Howard and their children: Matthew and Makenna, Jeff Howard and his children Nathan, Nick, and Nolan; and even more family and friends that are grateful for their time with Austin James. He is preceded in death by his grandparents Robert and Mary Dreckman; grandpa Junior Howard, and uncle Kevin Howard.

A celebration of life ceremony will be held on Saturday, October 16th, from 2:00 - 8:00 PM at the City Club private room in Waukon. All gifts, cards, and monetary donations to console or help in this very trying time should be forwarded to his wife Veronica Onken 510 West St. SW Waukon IA 52172. Martin – Grau Funeral Home in Waukon, assisted his wife with arrangements.