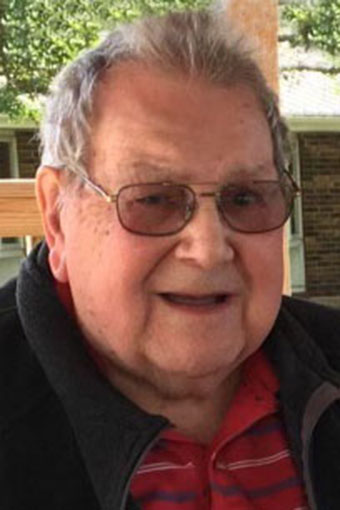 Kenneth A. Schneberger, age 95 of New Hampton, passed away on Wednesday, Sept. 28, 2022, at New Hampton Nursing and Rehab.

A Mass of Christian Burial will be held at 10:30 a.m. on Tuesday, Oct. 4, 2022, at Holy Family Parish in New Hampton with Father Jim Goerend celebrating.

Military rites will be provided by the Alta Vista VFW. Burial will follow at St. Mary’s Cemetery in New Hampton.

Visitation will be held from 4 to 7 p.m. on Monday, Oct.  3, 2022, at Conway-Markham Funeral Home and will continue at the church one hour prior to the funeral mass on Tuesday.

Online condolences may be left at www.conway-markhamfh.com. Memorials may be directed to the family.

Kenneth “Kenny” Arnold was born July 27, 1927, the son of Hubert and Albina (Huinker) Schneberger on the family farm in Festina.

He attended school at the Catholic grade school and graduated from Calmar High School in 1945.

After completing his education, Kenny enlisted in the United States Army. He proudly served his country as a paratrooper in the 82nd Airborne and was a part of the German post war occupation. Kenny received his honorable discharge in 1946.

Upon his return home, Kenny began farming with his family.

While attending a dance at Spillville, Kenny met the love of his life, Ethel Mae Huber. The couple was united in marriage on Dec. 28, 1950, at Our Lady of Mount Carmel in Lawler. The couple made their home first in Festina before they moved to Jerico, Alta Vista and settling in New Hampton later in life. Kenny became disabled after brain surgery in 1953.  He and Ethel Mae welcomed four children, Diann, June, Lynn and John.

Kenny enjoyed hunting, fishing, playing pool and euchre. But he was passionate about the game of baseball. He cheered mostly for the Chicago Cubs, but truly appreciated good playing by any team. In his youth, Kenny played ball with the Festina baseball team which was made up of his brothers, extended family and close friends.

He shared his passion with local youth as he coached little league in Alta Vista. He was a proud member of the Alta Vista VFW. Kenny will be remembered for his sense of humor and jovial outlook on life.