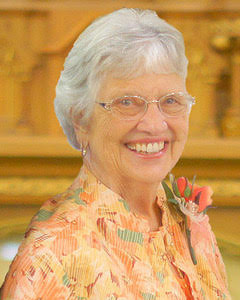 Bonnie Joella Olson Welden, a long-time resident of Iowa Falls and Alden, IA, died Friday, April 23rd in her sleep at the New Hampton Nursing and Rehabilitation Center in New Hampton. Bonnie was born February 23, 1926 and was 95 years old. She was a loving mother, devoted wife and wonderful friend.

She was the daughter of Hazel Walton Olson and Elmer A. Olson of Alden, and was born on her grandparents' farm near Popejoy, Iowa. She was the oldest of five children. She is survived by her sister Sherryl Olson Helman, Eugene, OR, brother William (Bill) Olson and sister-in law Lois Maine Olson, Webster City, IA, and sister-in-law Elizabeth (Libby) Hamilton Olson, Iowa Falls, IA. Her husband and brother Marlyn E. Olson and sister Roberta (Bobbie) Olson Garland and brothers-law Cecil Garland and John Helman preceded her in death.

Bonnie graduated from Popejoy High School in 1944 and attended the Hamilton School of Business in Mason City, and Ellsworth College in Iowa Falls, IA, studying English and Journalism.

She was employed by the Jacqua newspapers in Humboldt and then the Iowa Falls Citizen Printing Co. as Society Editor. Later, she was employed in the Kendall Young Library in Webster City and Webster City School System. She was part owner of Welden's West Side Grocery and Welden and Seals Radio Systems in Iowa Falls. Bonnie and her husband, Bill, worked on a Boy’s Ranch for troubled teens in Nebraska after they retired. They moved to New Hampton eight years ago to be closer to family.

She was a long-time member of the First Christian Church, CWF and P.E.O. Chapter DV, in Iowa Falls.

She loved Jesus, her husband, and her immediate and extended family, including 11 precious nieces and nephews and their families, flowers, babies, Bible studies and was an avid reader, especially on Kindle. In later years, she enjoyed keeping up with family and friends on social media on her laptop and iPad. She took a loving interest in everyone, and was a blessing to all who met her.
A private memorial will be held by her family in the summer.  The Linn’s Funeral Home is assiting the family with arrangements.