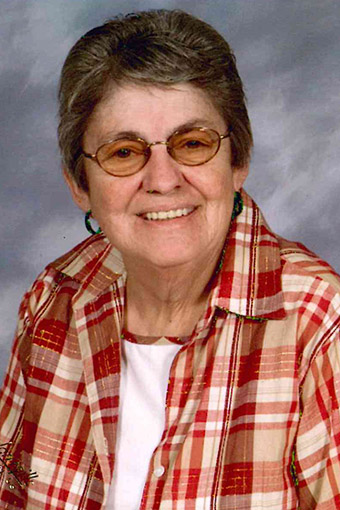 Carol N. Anderson, age 74, of New Hampton, IA passed away on Monday, August 16, 2021 surrounded by her family at her home.
Funeral services will be held at 10:30 AM on Friday, August 20, 2021 at Redeemer Lutheran Church in New Hampton with Pastor Peter Faugstad officiating. Burial will be at Jerico Lutheran Cemetery.
Online condolences may be left at www.conway-markhamfh.com. Memorials may be directed to the family.
Visitation will be from 4:00-7:00 PM on Thursday, August 19, 2021 at Conway-Markham Funeral Home in New Hampton and will continue at the church one hour prior to the funeral services on Friday.
Carol Neva was born October 28, 1946, the daughter of Arthur and Florence (Priebe) Buchholtz in Elma, IA. She attended grade school in Alta Vista, IA and graduated from New Hampton High School in the class of 1964.
After completing her education, Carol was united in marriage to Jerry Anderson on June 27 that same year. The couple welcomed their two sons, Steve and Rob.
Carol began career as an office administrator for Empire Gas and later Farm Service until her retirement. However, Carol wasn’t ready to sit during her golden years. She kept busy working part time for Chaff’s and Poor Richards.
She enjoyed fishing, gardening, canning. Her competitive edge really showed through as she played golf, pool, bowling and a good game of cards with her girlfriends.
Those left to cherish her memory are her sons, Steve (Carol) Anderson and Rob (Angie) Anderson both of New Hampton; her grandchildren, Jackson, Sawyer, Mya and Ryan; one sister, Mary Ann Haugen of New Hampton; her brother, Bill (Mary) Buchholtz of Alta Vista, IA; one sister-in-law, Doris (Larry) Schmidt of New Hampton; brothers-in-law, Larry Anderson of Des Moines, IA, Wayne (Walter) Rodriguez of California and numerous nieces and nephews and extended family.
She was preceded in death by her parents; her husband, Jerry; her sister, Betty (Wayne) Jensen; Jerry’s parents, Virgil and Edna (Knutson) Anderson.