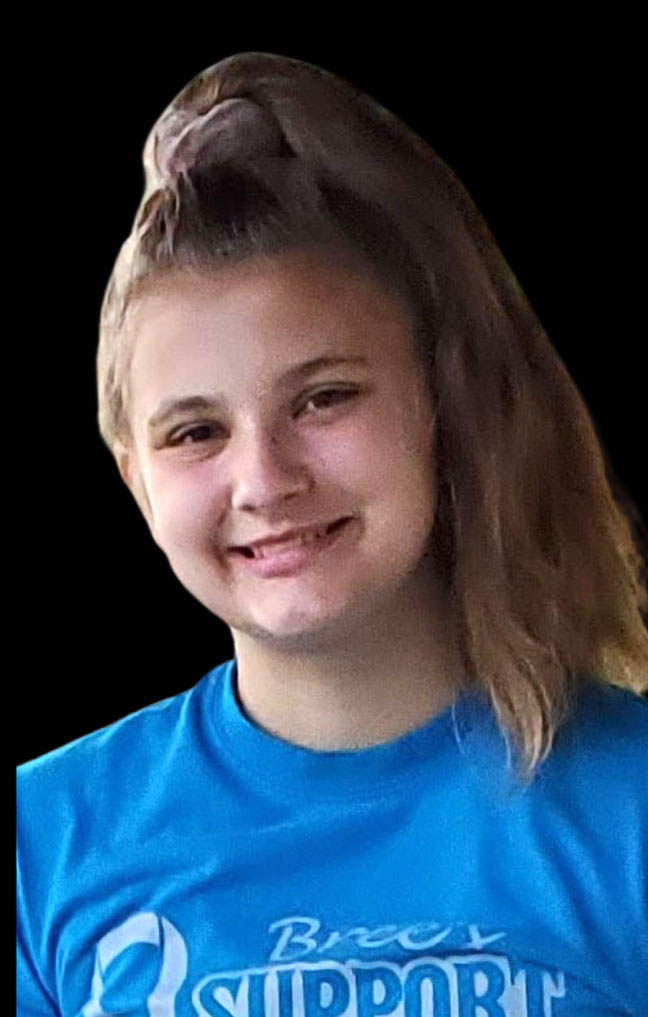 Lucille "Lucy" B. Nieman, age 13 of Fort Atkinson, died Friday, July 9, 2021, at her home from injuries sustained in an accident.
Funeral services will be held at 1:00 p.m. Monday, July 19, 2021, at the Waucoma Event Center, Waucoma, with Rev. Keith Pitts of the Delhi United Methodist Church Presiding. Graveside services will follow at 4:30 p.m. at the Fairview Cemetery, in Earlville, IA.
Friends may greet the family 1:00 - 6:00 p.m. Sunday, July 18, 2021, at the Hugeback-Johnson Funeral Home in New Hampton. Visitation continues an hour prior to the service at the Waucoma Event Center on Monday. Online condolences for Lucy's family may be left at hugebackfuneralhome.com.
Lucille “Lucy” Bernadine Nieman, came into the world two days after Jesus’ birthday, on the morning of December 27, 2007, in the town of Manchester, Iowa. She was welcomed by a small army of family and friends, which only swelled in numbers as she grew.
Her mother Elizabeth (Murray) Nieman-Simmons and father Justin Nieman, along with her brother Russell Nieman, and less than two years later, her sister Hazel Nieman all surrounded her in love and support. As Lucy’s life went along, she gained a loving step-father, Bruce Simmons, and a bonus mother figure, Merideth Bixler as well as their respective families.
There was no shortage of love for Lucy in her living years, and Lucy would beam that love times two back to everyone she met. It was impossible to avoid.
As a young child, Lucy would get in the best sort of mischief. She left those who knew her with an abundance of silly Lucy stories. She caused the cutest trouble, the kind that could never be punished. She was an animal lover and a girly girl, but she was tough, too, helping her father on his farm.
She loved to dress up herself and those around her - both human and animal. Her pet bulldog, Ruby, and her horse, Skipper were a significant part of her life.
Lucy carried the love of God on her sleeve, not with words, but with actions. She enjoyed being involved in church at Delhi UMC where she was both baptized as an infant and confirmed this past spring. She attended Camp EWALU every summer from a very young age.Everyone was Lucy’s friend, and she had a core of close classmates at Turkey Valley, where she was entering the eighth grade. Her “group” would spontaneously involve themselves in charitable causes and more than occasional hijinks.
Lucy was a peacekeeper in all of her relationships and would work tirelessly to help everyone get along. She was involved in volleyball, softball, basketball, and track — not so much for the competition, but to be a part of a team, which was something she never had to work to be good at.
She touched so many lives in her 13 years. There were her parents, her siblings, her extended family, and her legions of friends, and they will always carry a piece of Lucy in their hearts.
In death, Lucy is giving the gift of life through organ and tissue donation. Memorials can be directed to Bank Iowa or Northeast Security Bank and will be used to benefit a good cause.
Survivors include her mother, Liz (Bruce Simmons) Nieman-Simmons of Ft. Atkinson; her father, Justin (Merideth Bixler) Nieman of Delhi, IA; one sister, Hazel Nieman of Ft. Atkinson, one brother, Russell Nieman of Ft. Atkinson; step-brothers, Corbin (Reegan) Simmons of Denver, IA, Mason (Jennifer) Simmons of Lamoni, IA, Thane Simmons of Leon, IA, Tate Simmons of Afton, IA, Jace Simmons of Afton, IA; maternal grandparents, Susan Underwood of Fredericksburg; Mike (Deb Merrill) Murray of Lawler; paternal grandparents, Ralph (Reva) Nieman of Delhi, IA; Doug (Mary) Bixler of Clarence, IA; maternal step-grandparents, Steve (Carol) Faber of Waterloo; maternal great grandparents, Robert (Audrey) Rothmeyer of Ossian, IA; paternal great grandfather, Jerry Engel of Marion; one nephew, Rylan Simmons of Afton, IA; many aunts, uncles, and cousins.