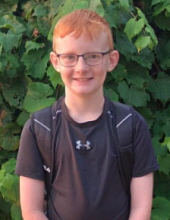 Lukas Scott Bouska, age 10 of Waucoma, died unexpectedly on Friday, Jan. 15, 2021.
A funeral service will be held 10:30 a.m. Saturday, January 23, 2021 at the Waucoma Event Center with Rev. Ronnie Koch celebrating the service. Interment will follow at St. Mary's Cemetery in Waucoma.
If you are unable to attend the funeral service, please join the family on Saturday at 10:30 a.m. for the funeral service via the Hugeback-Johnson Funeral Home & Crematory Facebook page.
Friends may greet the family from 3 - 8 p.m. on Friday, January 22, 2021 at the Waucoma Event Center. Visitation continues an hour prior to the service on Saturday at the event center.
Hugeback-Johnson Funeral Home & Crematory in Waucoma has been entrusted with funeral arrangements.
Lukas Scott Bouska was born on September 7, 2010, to Scott and Kendra (Kothrade) Bouska in La Crosse, Wisconsin, and he was welcomed at home by big sister Grace and later became big brother to Mason, Charlotte and Eleanor.
He grew up on a farm near Waucoma, and Lukas was so content and easygoing as a baby, and as he grew into a toddler, he became his own little man. Lukas loved to work with his hands and was very mechanically inclined. When he was three, he took off his training wheels for fun, taking every socket out of the set until he found the right one.
Lukas was a quiet but friendly boy who excelled in school at Turkey Valley Community Schools, where he was a fifth-grader who got all A’s. He was just so genuine. Once he got to know you, he’d do anything for you. He never left for school or went to bed without giving his mother a hug and kiss.
He also was athletic and loved football and, of course, wrestling with his little brother. One of the Bouskas’ favorite memories of Lukas will always be the Nerf Gun “battle” the family played at Christmas. Lukas took off his shirt and proudly showed off all the “scars” he had while “defending” his mother.
There was no bigger Iowa Hawkeyes football fan than Lukas, and he couldn’t wait to play tackle football this coming fall. His buddies figured he’d make a great tight end on the football field.
He just loved being outside with his siblings and his friends, doing everything from riding bikes to fishing to hunting for that one perfect rock. Lukas told his parents that one day, he and his good friend Jacob would open up a rock store. Finding a unique rock for his collection always made Lukas’ day.
Lukas was in the confirmation class at St. Paul’s Lutheran Church in Fredericksburg, and once he got to know his classmates — all of whom attended a different school than he did — they became very close.
Lukas packed a lot of life into his 10 years, and the world just won’t be the same without this kind, genuine and yes, at times, goofy boy. He had a smile that lit up the lives of so many — his mom, his dad, his siblings, his other family members and his friends — but all those people whose lives he touched know that he’s enjoying Heaven’s rocks, fishing holes and football fields. He will be forever loved.
Lukas is survived by his parents, Scott and Kendra Bouska of Waucoma, IA; four siblings, Grace Bouska, Mason Bouska, Charlotte Bouska, Eleanor Bouska, all of Waucoma, IA; maternal grandmother, Jocelyn (Kevin) Anderson of Brandon, FL; maternal grandfather, Loren (Heidi) Kothrade of Ridgeland, WI; paternal grandmother, Pat Bouska of Waucoma, IA; maternal great-grandmothers, Lucy Joyce of Blaine, MN and Marlys Kothrade of Corcoran, MN; many aunts, uncles, cousins and friends.
He was preceded in death by his paternal grandfather, Francis Bouska on April 22, 2014; his aunt, Aja Bouska; one cousin, Jacob Streif.