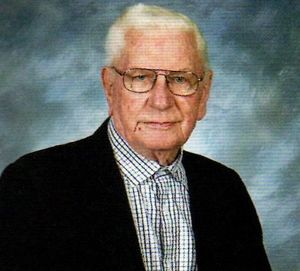 Merle Henry Hoffman, 91, of Marshalltown, passed peacefully and quietly at the home of his daughter in Sun City, Ariz. Saturday, Oct. 31, 2015.
A Mass of Christian Burial will be held on Saturday, Nov. 7, 2015 at 10:30 a.m. at Holy Family in New Hampton. Visitation will take place one hour prior to the service. Burial will be at Calvary Cemetery in New Hampton after the service. For more information or to send a condolence please visit www.mitchellfh.com or call 641-844-1234. Mitchell Family Funeral Home is caring for Merle and his family.
Merle H. Hoffman was born in December of 1923 to his parents, Henry and Marie Hoffman in New Hampton.
After graduation from New Hampton High School, Merle worked for Lockheed- Martin in Kansas until he was called for active military duty with the 776th Squadron of the 464th Bombardment Group stationed out of southern Italy. Merle and his crew flew 26 missions during their length of duty. Merle received the Purple Heart in November of 1944 for retrieving a number of his crew members from behind enemy lines on the Ilse of Malta after being shot down by enemy fire. He also received the Distinguished Flying Cross, which is the highest honor ever given to an enlisted member of the military, for heroism and extraordinary achievement in Feb. 1945, while participating in aerial flight as the pilot when he safely landed his plane after it received damage in the skies over Hungary, where he and his crew landed again behind enemy lines. Merle was honorably discharged from the military in May of 1945.
Upon his return to the states Merle attended the Iowa State University where he studied mechanical engineering. In May of 1949, Merle was united in marriage to Elizabeth Marie Burns in New Hampton. His professional career included work for Banner Corporation in Waverly, Iowa Die Casting in Cedar Rapids, and retired from the sales department of Kiowa Corporation in Marshalltown. Merle was a life-time member of the Knights of Columbus, 4th degree, member of Saint Mary’s Parish in Marshalltown, the American Legion and the Catholic Order of Foresters. Merle loved to golf where he made two hole-in-one shots during his lifetime and bowling.
Merle is preceded in death by his wife Elizabeth, who passed in 1998, his daughter, Dr. Jean Anne Saigh who passed in February, 2015, his parents and brothers: Zeke, Gerald and Paul, Hoffman.
Merle is survived by his family: children: Mary Jo Hoffman of Arizona, Dr. Craig A. (Susan) Hoffman of Minnesota, and Lori M. (Richard) Davies of Maryland. Craig Saigh, son-in-law, of Omaha, Nebraska.
Grandchildren: Josh J. (JoJo) Vanderah of Arizona, Dr. Quinn M. (Clint) Saigh-Brown of South Dakota and Elizabeth M.L. (Justin) Davies-Pinta of Ohio. Great-grandchildren: Merle J. and Alexander J. Vanderah of Arizona.
In lieu of flowers: Donations can be made in Merle’s name to:Hospice of the Valley, 9435 West Peoria Avenue, Peoria, Arizona 853345-6479Per family request please send all correspondence directly to Mitchell Funeral Home, Marshalltown Iowa home: attention Rich Green.