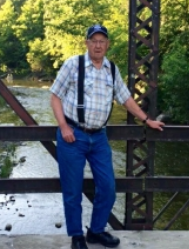 John was born Jan. 11, 1936, the son of John and Mary (Farrell) McEnaney, in Dubuque. He graduated from Lawler High School where he was active in baseball, basketball and Boy Scouts. On June 1, 1958, he was united in marriage to Evelyn Denner. They initially made their home on their farm near Jackson Junction and then moved to New Hartford in 1968. The couple would later divorce. John was a farmer, an over-the-road truck driver and worked at John Deere for 23 years. On Feb. 14, 1981, he was united in marriage to Sarah (Yarcho-Johnson) in New Hartford where they lived. Sarah passed away in 2016 and John continued to live in New Hartford.

If you knew John, you know he loved to visit! He could carry on a conversation with anyone and loved to tell stories. He was an avid outdoorsman; he loved to hunt, fish, go camping and cut wood. One of his favorite things to do was to drive around and eat at restaurants. He enjoyed watching western movies and cheering on the Green Bay Packers and his favorite quarterback, Tom Brady, with the Patriots and the Buccaneers.

Visitation was held from 4 to 7 p.m. on Thursday, Sept. 30, 2021, at the Kaiser-Corson Funeral Home in Waverly. Mass of Christian Burial was held at 10:30 a.m. on Friday, October 1, 2021, at St. Patrick’s Catholic Church in Parkersburg. Burial was held at 11 a.m. on Saturday, Oct. 2, 2021, at Saint Rose Cemetery in Waucoma. Memorials may be directed to the family and on-line condolences may be left at www.kaisercorson.com.&nbsp;