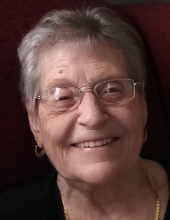 A Mass of Christian Burial will be held 10:30 a.m. Saturday, Oct. 16, 2021, at St. Michael’s Catholic Church, Nashua, with the Rev. Tom Heathershaw celebrating the Mass.

Inurnment will be in the church cemetery.

Friends may greet the family from 4 to 6 p.m. Friday, Oct. 15, 2021, at the Hugeback-Johnson Funeral Home & Crematory/Olson Chapel in Nashua. Visitation continues an hour prior to the Mass at the church on Saturday.

Rita was born on Aug. 22, 1931, to Carl and Laura (Merfeld) Popes in Greene, and she was the second of the couple’s six children.

She grew up in the Greene and Nashua areas and attended country school, and at one of the schools, she admired the “house on the hill” almost every day and told her friends that’s the “kind of house I want to live in when I grow up.” She did as she and her husband called the house home from 1963 to 1991.

But we’re getting ahead of ourselves here; first, Rita had to finish school, which she did when she graduated with the Class of 1949 from Nashua High School. She then attended Mount Mercy College, where she studied to be a legal secretary and also dabbled in drama.

In 1950, she was asked out on a date by Charles Swinton, who was a year ahead of her when they were in high school. They went to a movie in Charles City, and Rita and Charles provided proof to the adage that opposites attract. Rita stood 5-feet-tall on a good day; Charles was 6-4, but they made a heck of a couple for almost 70 years.

The two exchanged vows on March 31, 1951, at St. Michael’s Catholic Church in Nashua, and shortly after they were married, Charles enlisted in the U.S. Navy and was part of the American forces fighting in the Korean War.

Rita, meanwhile, took a job with attorney John Cronin in Nashua, and when Charles came home, they raised a family that grew to include three children — Linda, Curtis, and Clair, and in 1963, the family moved to that “house on the hill” and lived there for 28 years before Rita and Charles purchased a beautiful home on a Lexington Avenue corner lot in Nashua.

Rita also worked at Skyline Harvester for a few years but returned to the law firm and worked one day a week at Cronin and Skilton right up until her 90th birthday.

She loved her children and adored her grandchildren and great-grandchildren. She had four grandsons — Matthew, Michael, Eric, and Andy — and she was immensely proud of them and their accomplishments, often telling her friends there’s “not a loser in the bunch.”

Christmas was her favorite; nothing in the world beat having her family with her — both at Mass and then in her home, where they feasted on all their favorites and opened presents.

Rita was a black-belt cook and baker, and that’s how she paid those who helped her. The amount of pies, bars, and cookies she made — and gave away in bulging ice cream buckets — in her lifetime is probably known only to God, and she made everything from scratch. Her pumpkin bars with homemade cream cheese frosting were legendary, and if you had the audacity to bring in a store-bought can of frosting, she’d toss it out the window.

She loved to play cards and was a longtime member of a bridge club in Nashua,

She volunteered at the St. Michael’s food stand for 74 straight years at the Big 4 Fair, joining her church friends in making homemade noodles. Rita was bitterly disappointed that the fair was canceled in 2020 because of the pandemic, and she passed away four days before this year’s fair. But she and her friends had gathered in June to make their noodles, so we’re going to say she made her 75 straight years.

Rita simply lived a remarkable life. She “tamed” Charles, she was active in her church, she continued to help the law firm with estates right up until her death, she popped popcorn at the bank and she raised a family with a love that was reciprocated by her children, grandchildren, and greats.

Charles passed away in 2019, but Rita didn’t slow down. Her yard remained beautiful, her work ethic remained strong and her commitment to her family and friends never wavered.

She had many friends, but her family will always be grateful for two in particular — Cindy Shoemaker and Jeanne Olson.

The world won’t be the same without this little 5-foot spark plug whose lesson — you’re no better than anyone else but no one is better than you — will endure for years to come for all those whose lives we’re lucky enough to be touched by this wonderful woman.

She was preceded in death by her parents; husband, Charles on Oct. 19, 2019; one brother, Howard Popes; and two sisters, Mary Mahoney and Patty Schimek.