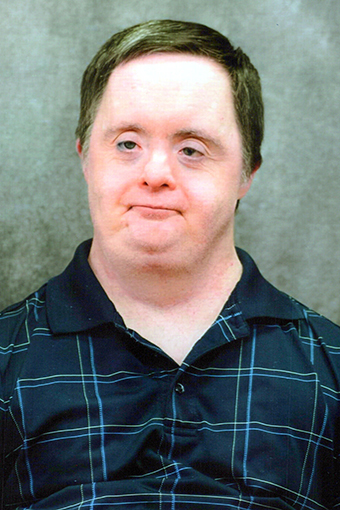 Hugeback-Johnson Funeral Home and Crematory of New Hampton has been entrusted with arrangements. Online
condolences for the Brown family may be left at hugebackfuneralhome.com.

Being born with Down Syndrome never deterred Andy from anything. He had a wonderful childhood and did everything any boy would do. He and his little sister, Megan, were constant companions.

As he grew he became friends with everyone in New Hampton. Wherever we went we were sure to hear “Hi, Andy” multiple times. He quickly became the apple of our dad’s eye and the two of them became inseparable.

Andy attended school as a special education student where he did very well.

He would often be seen on Sunday serving Mass at St. Mary’s Church. After graduation he worked at several part-time jobs including working at Hardee‘s, Fareway, and detailing cars at Vern Laures Auto Center

He eventually moved to Comps System Group Home in New Hampton. He spent many happy years there and was lovingly cared for by Val Kolbet and Mary Langreck.

He loved being around his family, watching WWF, and watching his favorite Iowa Hawkeyes. Andy’s last residence was Good Shepherd Nursing Home in Mason City. He was well cared for and spoiled by the staff.

We will miss him dearly but are content to know Dad and Mother will welcome him home. He will be delighted to hang with his special brother-in-law, Luigi, again.