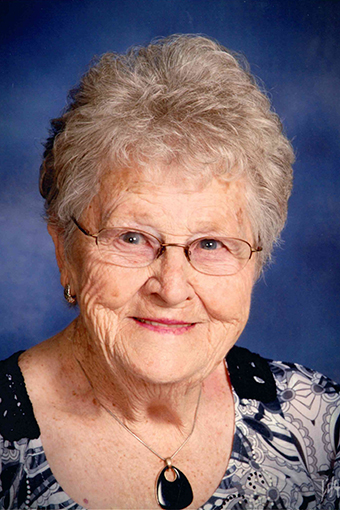 A Mass of Christian Burial was held at 11 a.m. on Saturday, Oct. 30, 2021, at Our Lady of Mt. Carmel in Lawler with Fathers Nick Radloff and Brian Dellaert concelebrating.

Burial was held at Our Lady of Mt. Carmel Cemetery in Lawler.

Visitation was from 4 to 8 p.m. on Friday, Oct. 29, 2021, at Conway-Markham Funeral Home in New Hampton, with a 3:30 p.m. Rosary and 8 p.m. Scriptural Wake Service.  Visitation continued at the church one hour prior to the funeral mass on Saturday.

Online condolences may be left at www.conway-markhamfh.com. Memorials may be directed to the family.

While at a dance at Junko Hall, Ardes was smitten by a young man by the name of Thomas “Jim” James King.  They were united in marriage on Aug. 30, 1949, at Reilly Ridge.

The couple made their home in Lawler where they welcomed their 10 children — Cathy, Jeannie, Lauren, Gary, Raymond, Karen, Kevin, Dennis, Darrin and Terry Joe.  Together, they farmed and milked side by side until Jim’s sudden death on May 15, 1977.  Ardes continued to manage the farm and milk the cattle until she retired in 1995.

Ardes enjoyed bowling, crocheting, and working at Cutsforth Pizza and Chicken. Her family was her pride and joy.