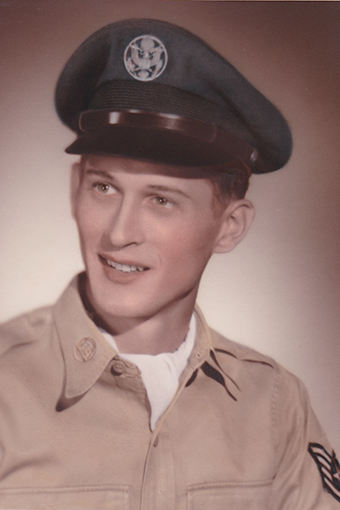 A Memorial Mass will be held at 10:30 a.m. Friday, Nov. 5, 2021, at St. Michaels Catholic Church in Nashua, with the Rev. Tom Heathershaw celebrating the Mass.

Interment will be at Arlington National Cemetery in Arlington, Virginia, at a later date.

Friends may greet the family from 4 to 7 p.m. on Thursday, Nov. 4, 2021, at Hugeback-Johnson Funeral Home & Crematory/Olson Chapel in Nashua. The Rosary Service will be at 5 p.m.

Online condolences for the Benyo family may be left at hugebackfuneralhome.com.

Tom was born on September 19, 1932, to Steven and Anna (Skiora) Benyo in Armbrust, Pennsylvania, a small town located outside of Pittsburgh.

At the age of 18, Tom enlisted in the U.S. Air Force, and he proudly served his country all over the globe for more than 20 years. He specialized in radar and communications and rose to the rank of master sergeant.

While stationed at the Waverly Air Force Base in Iowa, he met Phyllis Bloom, a lab technician.  They fell in love and were married on Sept. 19, 1953, at St. Edward’s Catholic Church in Waterloo.

Tom’s Air Force career took him to countries like Formosa, Germany, and Newfoundland. Tom and Phyllis enjoyed their travels throughout Europe and Asia.

By 1964, his family grew to include two daughters, Tracy and Kelley.  After which, his stateside assignments included Corvallis, Oregon; Sioux City; and Havre, Montana.

In 1971, Tom retired from the Air Force, and the family moved to Phyllis’ hometown of Nashua. Tom took a job with Sara Lee in New Hampton, where he eventually became the director of security, before retiring in 1994.

Tom was an outstanding golfer, and while in the Air Force he captained numerous base teams.  After he retired, he also won several Nashua Town and Country Club Championships.

He was a longtime member of the VFW posts in Nashua and Waverly. Tom always took pride in his service and maintained a strong advocacy for his fellow veterans. Recently, he was selected for an Honor Flight to Washington DC, which he enjoyed immensely.

Tom and his wife were active members of St. Michael’s Catholic Church, frequently volunteering at the fair stand and with cemetery upkeep.

At his core, he was dedicated to his family, that later grew to include two granddaughters of which he was so proud. Those who knew him will miss this patriotic family man, but find comfort in the fact that Tom and Phyllis are once again together.

He was preceded in death by his parents; all of his siblings; his wife, Phyllis in 2015; daughter, Kelley Benyo in 2019.