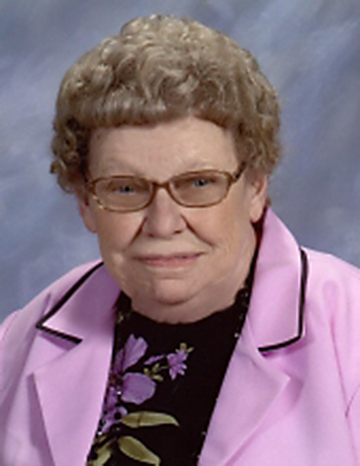 Elizabeth “Betty” Jean Wurzer, age 90, of Lawler passed away on Saturday, Nov. 13, 2021, at the Whispering Willows Assisted Living in Fredericksburg.

Friends greeted the family from 4 - 7 p.m. on Thursday, Nov. 18, 2021, at Our Lady of Mt. Carmel Catholic Church in Lawler. Visitation continued an hour prior to the Mass on Friday at the church. The Hugeback-Johnson Funeral Home and Crematory was honored to serve the Wurzer family.  To share a special memory or condolences, please visit hugebackfuneralhome.com.

Betty was born Feb. 14, 1931, on the family farm near Calmar to Edward and Matilda (Wenthold) Kleve. She soon received the nickname of “Betts” by her younger brothers: Marvin, Paul, Herbert, and Linus. While attending a dance in Spillville, she met Edgar Wurzer from St. Lucas and they were married Sept. 27, 1950 at St. Aloysius Church in Calmar. To this union nine children were born: Phyllis, Sandy, Gary, Dale, Randy, Karen, Tim, Terry, and Lori. They purchased a farm south of Lawler where they raised hogs, chickens, and a very productive dairy herd. “No one ever left the Wurzer farm hungry!”

Betty and Edgar worked side-by-side on the farm until 1992 when they purchased a home in Lawler, but they continued to make daily trips to the farm, helping out their son Terry. Betty had a love of cooking and began catering for many weddings, anniversaries, family, and church events. In 1995, she became head cook at the Jackson Heights Country Club, working there for 21 years before retiring at the age of 85.

She was very active in the Sisters of Stapleton Township and enjoyed playing cards with family and friends. Betty was a life-long member of Our Lady of Mt. Carmel Church and a 60-year member of the Catholic Daughters of America and a 22-year member of the American Legion Auxiliary. In 2009, she was recognized as Grand Dairy Woman at the Fredericksburg Dairy Days celebration and was even a published author, having had her article about growing up on the farm appearing in ‘Reminisce’ magazine. She kept a calendar filled with the birthdays and anniversaries of her children, grandchildren, and great-grandchildren and would send a card every year without fail.

Betty became a resident of Whispering Willows Assisted Living in February of 2019, where she enjoyed the company of her fellow residents, old t.v. shows and polka music, especially Jim Busta and Mollie B. Her grandchildren and great-grandchildren were the light of her life and they always knew where she kept the toys and candy dish.

The family of Betty wishes to extend their gratitude to family, friends, and neighbors for the love and support during Betty’s 90 years here on Earth.