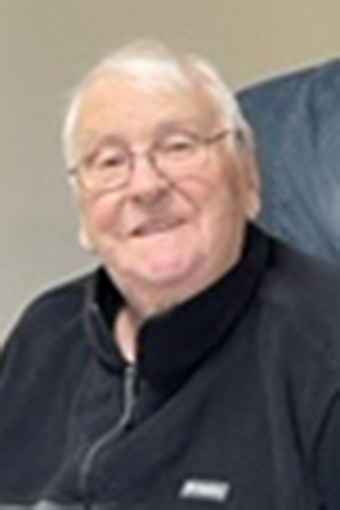 Gerald Franklin Johnson, age 86 and a long-time resident of New Hampton, died peacefully on Sunday, Nov. 28, 2021, at MercyOne Medical Center in Waterloo with his family and his dear companion Marjorie Bullen by his side. He gratefully commented that he had “a great run” and “more friends than a man deserved.”

The youngest of four children, Gerald was born on July 12, 1935, to George F. Johnson and Gladys Leachman Johnson and grew up on the family farm southeast of New Hampton. He attended the Sunnydale Number 7 one-room schoolhouse, the New Hampton Community School and graduated from New Hampton High School in 1953. His love of agriculture was reflected in his involvement in FFA and 4-H, including participation in the 4-H National Club Congress in 1956. In the late 1950s, Gerald took over the family farm, raising corn, soybeans, cattle, and hogs.

Married to Marilyn “Rose” (Funke) Johnson, formerly of Ossian, for 48 years until her death in 2008, Gerald took great delight in her cooking and baking as well as her tolerance for his pranks, jokes, stories, and general tendency to embarrass her. He was convinced that she couldn’t have chosen better but she wasn’t so sure. Gerald published a cookbook of favorite family recipes in 2008, dedicating it to Rose’s memory and donating proceeds to the local food pantry.

Gerald and Rose raised four girls on the family farm southeast of New Hampton. He loved being a farmer and caring for the land as its temporary custodian.

Keenly interested in soil conservation, he served for five years on the Iowa Soil Conservation Committee in the early 2000s. For a time, he had an Angus cow-calf herd and took great joy in checking on the cattle and, especially, the new calves. From 1976 until his retirement in 2002, Gerald sold Pioneer seed. He was an avid gardener, becoming a Master Gardener through Iowa State University Extension and Outreach. Friends and family enjoyed the bountiful fruits, vegetables and sweetcorn he and Marilyn grew in their garden. He was especially proud of his flowers and a flower garden tour was offered to all visitors to the farm.

Moving into New Hampton in 2007, he and Marilyn promptly established a new garden to the delight of their new neighbors who quickly became friends.

A natural organizer for social events, he enjoyed organizing reunions for the NHHS Class of ’53 and meeting with high school classmates at local restaurants and bars. Gerald was active in the New Hampton Lions Club, getting the Lions International Warren Colman award in 2007. For years, he manned the pancake griddle for the Lions Pancake Breakfast, eventually “retiring” to the admission ticket table. He was also active in the local Democratic Party and was a strong supporter of Ducks Unlimited.

Passionately interested in local history, Gerald spent hours in Iowa antique stores and on E-bay assembling a treasure trove of New Hampton and Chickasaw Country memorabilia including postcards, trade tokens, bank notes, and local collectibles. These items were often loaned to the Carnegie Cultural Center so that others might enjoy them. In 2019 and early 2020, he worked diligently assisting Juanita Andersen in the preparation of the book “Stuff, an Ephemera Collector’s History of Chickasaw County” for the Carnegie Cultural Center. He was a life-long learner, reading avidly and attending community education lectures at Luther College

Gerald was a collector – of marbles, Chickasaw County memorabilia, antique furniture, cut glass, Arm & Hammer trading cards and posters, Civil War memorabilia, and Big Little Books among other things, but also of friends and stories. He enjoyed canoeing on the Upper Iowa and exploring the beauty of the region, scuba diving in tropical waters, family vacations in the station wagon, and fishing in Canada. After his retirement, he had “business” cards made listing his title as “Transaction Facilitator”. If someone wanted half a crate of Texas peaches from the Mennonite grocery or ring bologna from the locker in Eitzen, Minnesota, he was the go-to guy.

If asked about Gerald, more than 99 percent of those who knew him are likely to cite his sense of humor; the remainder are probably not people you would want to hang out with.

He was preceded in death by his wife Marilyn, his beloved granddaughter Elizabeth (Liza) Hassler, his parents (George and Gladys), and all of his siblings and their spouses: Mary Ann Johnson Muench (Robert), Martha Johnson Peterson (Roger), Lloyd Johnson (Virginia). He was the last of his generation on the Johnson side, and his family deeply mourns his passing.

A Celebration of Life will be held in July 2022, due to the risks of gathering indoors at this time. In lieu of flowers, the family respectfully asks that memorial contributions be directed to the Marilyn Johnson Memorial Scholarship (through New Hampton Dollars for Scholars), the Carnegie Cultural Center in New Hampton, the Ronald McDonald House of Rochester, Minnesota, or the Cedar Valley Hospice (or another hospice program of the donor’s choosing).