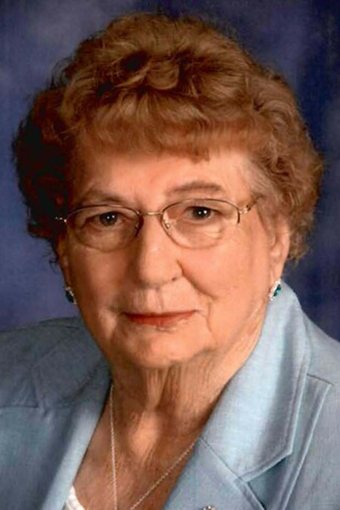 A Mass of Christian Burial was held at 10:30 a.m. Friday, Jan. 14, 2022, at Assumption Parish, Little Turkey, with the Rev. Nick Radloff celebrating the Mass.

Friends greeted the family from 3 to 7 p.m. Thursday, Jan. 13, 2022, at the Hugeback-Johnson Funeral Home & Crematory in New Hampton,  where there will be a 7 p.m. Parish Scripture Service. Visitation continues an hour prior to the Mass at the church on Friday.

Online condolences for the Throndson family may be left at hugebackfuneralhome.com.

Lou Ann was born on Nov. 16, 1933, to Carl and Mathilda (Scholbrock) Baumler on the family farm east of St. Lucas. She was the seventh of the Baumler’s 10 children, but she was the oldest daughter and growing up, she was her mother’s “right-hand person.” She helped her mother with anything and everything around the farm and in their home. She learned to bake bread, cook, sew, mend clothes, and tend gardens and at an early age, Lou Ann had a strong work ethic, one that she carried with her throughout her life.

Lou Ann attended St. Luke’s Catholic School through the eighth grade, and after her schooling was complete, she continued working at home and later at the eggplant in Calmar. She met Harlan Throndson and they were married on May 14, 1956, at St. Luke’s Catholic Church in St. Lucas. Lou Ann and Harlan farmed together north of Lawler, where they raised their four children — Rick, Denise, Wayne and Dale — who remember growing up with a mother who worked hard.

Lou Ann was always up for a good card game, especially euchre, and she loved to get together with her friends to play and visit. She also immensely enjoyed the trips she took with her sisters, and over the years, they visited places like Hawaii, the Grand Canyon, New England and New York City.