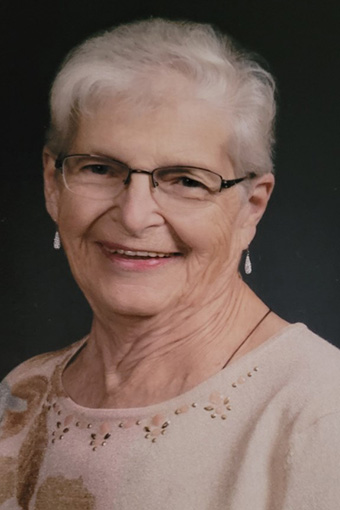 Visitation will be held on Friday, February 18, from 4:00 p.m. to 7:00 p.m. at the Kaiser-Corson Funeral Home in Readlyn and also for one hour prior to the mass on Saturday at St. Mary Catholic Church in Waverly. There will be a rosary that will begin at 10:30 a.m. followed by Mass of Christian Burial at 11:00 a.m. Saturday, February 19 at St. Mary Catholic Church in Waverly. The service will be livestreamed on the Kaiser-Corson Funeral Home Facebook page starting at 11:00 a.m. Burial will be held in Calvary Cemetery in New Hampton.

Dolores was born August 9, 1933, the 8th of 13 children of Julius and Susan (Glaser) Rosauer. Dolores made her first communion, was confirmed, and attended twelve years of school at St. Boniface. She was united in marriage to Robert Arthur (Bob) Ungs on September 10, 1951, at St. Boniface Catholic Church in Ionia, Iowa.

In 1962, they moved to Readlyn to own and operate the corner pub, Du Kum Inn. Dolores worked at many different jobs, the longest 19 years at Powers Manufacturing in Waterloo. In the late 80s, she and Bob opened and ran a very successful family franchise of Borderline Pizza just North of Readlyn.

Dolores started and ran the Readlyn “Share” meals program. She was a lifetime volunteer and loved being in card clubs and Red Hats. She was active in her parish Auxiliary at St. Mary’s in Waverly, Readlyn Community Club, Historical Society, American Legion and other community organizations. She helped with community meals and anywhere she could help and be with people.

Playing cards or board games with her grandchildren while eating ice cream and talking with Red Hats friends were her favorite things. Her presence in the family and community will be greatly missed.

Kaiser-Corson Funeral Home is assisting the family with arrangements.