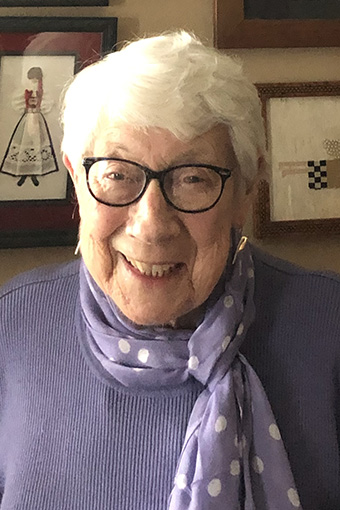 Hazel Magdalene was born on Oct. 15, 1926, in her grandmother’s home in rural New Hampton. Hazel was the daughter of Attley and Millie Attleson.

She had an exciting childhood and went to elementary school in Gays Mills, Wisconsin, and moved to New Hampton in 1940 where she served as class president and graduated from New Hampton Community High School in 1944.

After high school, Hazel was off on an adventure to Washington D.C. to work in operations for the FBI. Because of World War II, there were many employment needs in D.C. Hazel shared many stories about her adventures and opportunities there.

Later, Hazel worked in Minneapolis and then returned to New Hampton where she met and later married (Oliver) Don Hereid. They were united in marriage on May 15, 1949, at St. Olaf Lutheran Church in New Hampton.

During her adult life, Hazel was a great stay-at-home mom until her four children were in elementary school. Then she worked as a cook for the New Hampton Schools for 25 years; sharing way too many laughs in the kitchen with the other ladies!!

Hazel was most happy when she was with family. Spending time with her children, grandchildren and great-grandchildren was very important. She went to sporting events, dance recitals, school music programs, graduations and even last year to a Homecoming parade.

Throughout her life she spent time with her sisters, Mavis and Thelma.  The three of them had daily coffee and many adventures, with Roger and Dony trying to keep up.

Hazel’s hobbies included baking, sewing, quilting, her flower garden and in later life, reading and teaching her daughter Jan to cook. Hazel could always find a recipe to try! She enjoyed being with people and always had hot coffee and a treat ready when someone knocked on her door.

Hazel was a member of Trinity Lutheran Church, member of the American Legion Auxiliary since 1948 and a long-time volunteer at the Carnegie Culture Center.

The visitation was held prior to the services from 10 to 11 a.m. at the church.

In lieu of flowers, memorials may be made in Hazel’s name to Trinity Lutheran Church or the Carnegie Culture Center in New Hampton.