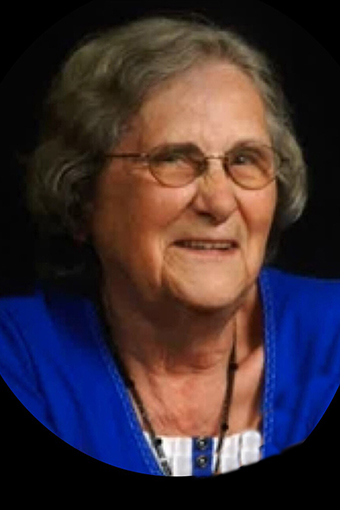 Friends may greet the family from 4:00 - 7:00 p.m. Thursday, September 29, 2022, at Hugeback- Johnson Funeral Home & Crematory -- Olson Chapel in Nashua, IA where there will be a 3:15 p.m. Parish Scripture Service presided by Gene Saienga.  Visitation continues from 9:30-10:30 a.m., at the funeral home, prior to the mass.  Online condolences for the Gilbert family may be left at hugebackfuneralhome.com

June Elaine Gilbert was born on June 9, 1930, to Earl and Francis (Everhart) Townsend in Charles City. Months before, the county had plunged into the Great Depression, which shaped much of her life.

She grew up in Charles City, where she attended school, played intramural basketball, and was a member of Charles City High School's Class of 1948. She loved roller skating and did so competitively. She rarely missed a day at the rink, where she skated for free because she helped young children get their skates on.

After graduating from high school, June worked at the Canton Cafe in Charles City, and located just above the eatery was a dance hall. One night, a young man named Norbert Gilbert and his buddies went to a dance and stopped in at the Canton Cafe. A beautiful love story was born that evening as June and Norb began dating, fell in love, and exchanged vows on April 25, 1950, at Immaculate Conception Catholic Church in Charles City.

The couple began married life on a farm near New Hampton, moved to the Plainfield area five years later, and then moved to the Horton area in 1980. They raised 13 children, with a mother who had the knack for making everyone - her children, their friends, or even complete strangers - feel special.

June and Norb were meant for each other; their marriage lasted 70 years and one day, and Norb always said that his wife was his life. They worked side-by-side on the farm, where June not only managed the household but enjoyed getting outside and doing chores.

She knew how to have fun, too, and loved playing cards - be it 500, Euchre, Up and Down the River, Canasta, or any card game really. June was the first one up in the house and often began her day with a game of solitaire. She told her children and repeated to her grandchildren that "there are no friends in card games." In other words, she played to win!

June's desserts - be it her angel food cake with strawberries, cherry pies, or lemon pies, just to name a few - were legendary, and anyone with a sweet tooth who spent time at the Gilbert's will tell you June was the best.

June also cared for children from several families and any child who spent time with June was quick to call her “Grandma June”.

Growing up in a time of hardship, June developed a tremendous work ethic that she carried with her throughout her life. Her children will tell you that mom was the "queen of pinching pennies" and that only God knows how many coupons June clipped and used to help save money.

When June put her mind to anything, she would complete the task. Even as she approached 70, she would ride her single-speed bike from Horton to Nashua and haul home two gallons of milk on the way home while collecting cans from the ditches.

There are so many stories we can share about this amazing woman, but over the course of her 92 years, she encountered thousands of people, and she made each and every one of them feel special. That, our friends, is a life well-lived.