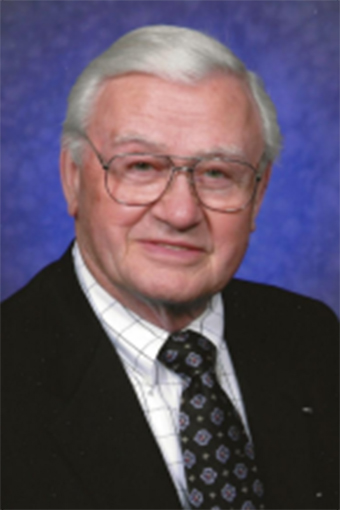 Interment will follow at the New Hampton City Cemetery.

Friends may greet the family one hour prior to the funeral service on Saturday at the funeral home.

Jim’s long and productive life began on Aug. 15, 1926, when he was born to Howard and Gertrude Ferkin in Roland. He began his schooling in Roland before his family moved to Marshalltown, where he graduated from high school in 1944.

After spending a semester at Iowa State University studying veterinary medicine, Jim enlisted in the U.S. Army, where he served his country as K-9 unit handler during World War II. Due to an illness, he was honorably discharged in 1945, and he and his parents moved to New Hampton.

Jim and his family almost immediately made an impact on their new hometown, as he and his parents opened New Hampton’s first supermarket, Ferkin’s Super Valu, and they ran the store located on Main Street until 1960. The Ferkin’s believed in giving their customers the best possible price and the best customer service at the store.

It was in the 1950s that Jim met Sharon Drewelow, who worked at KGLO-TV in Mason City but was home for the holidays working at Barb and Ole Knutson’s store when the two met and the connection was almost immediate. The two began dating, fell in love and were married on May 4, 1958, at what was then called St. Paul’s Lutheran Church (today’s Trinity) in New Hampton.

Their family grew to include two sons, Gary Lee and Robert, and Jim was always there for both his wife and his two sons. He was the husband and father they could always count on. They spent many summer weekends in Bloomington, Minnesota, where Jim loved taking his family to Metropolitan Stadium to see the Minnesota Twins play ball. On several occasions Jim took his family to Walt Disney World and other attractions around Florida.

In 1960, the couple built and began operating Ferkin’s Motel, today’s Southgate Motel, that was located on Highway 63 on the south side of New Hampton. The family lived at the motel and put in many long days and nights to make sure their guests received all they needed for a good night’s rest.

The couple retired in 1980, although truth be told, retirement wasn’t really in Jim’s vocabulary. He worked at Matt’s Super Valu, HyVee in Charles City and was a cemetery grounds keeper, along with working at the newspaper, this all kept him busy.

Jim loved to work, but he also had plenty of interests. He loved to golf at both the New Hampton Golf and Country Club and Sebring Country Club in Florida, where he and Sharon wintered for many years. He loved his cars, especially convertables, and anyone who knew Jim knew that he was a stickler when it came to keeping his cars pristine and clean! He also loved playing 500, euchre and cribbage.

Jim also believed in giving back to his community. He was a proud member of the American Legion Fae Stone Post 38 in New Hampton, the New Hampton Chamber of Commerce and the two churches — Trinity in New Hampton and the Spirit of Joy Lutheran Church in Clarkdale, Arizona — in which he was an active member.

Jim remained active for much of his life, overcoming prostate cancer in 1999, bypass surgery in 2001, knee replacement in 2002 and a stroke in 2009, and although the latter put a kibosh on his golf game, he still loved his daily trip to McDonald’s to sit around with the guys and solve the world’s problems!

And he was a proud and loving grandfather to his grandson, Jarryd Ferkin.

For 96 years, he made the world — here in New Hampton and in places like Sebring and Clarkdale — a much better place, and he will be dearly missed by all those lucky enough to have their lives touched by Jim.

Jim is survived by his wife of 64 1/2 years, Sharon; his son, Robert (Christie) Ferkin; his grandson, Jarryd; his great-granddaughter, Destini; his brother-in-law, Gary (Joan) Drewelow.

He was preceded in death by his parents, Howard and Gertrude; his son, Gary Lee Ferkin; one sister, Gen (Clyde) Clark; brother-in-law, Lee Drewelow.