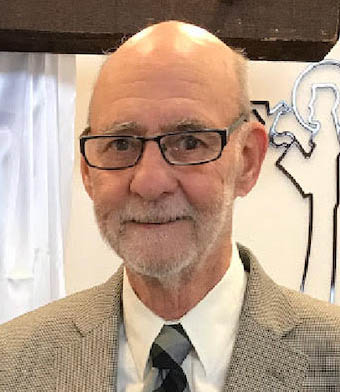 Robert James Martin, age 78 of Rochester, Minnesota, and formerly of New Hampton, died Thursday, Feb. 11, 2021, at his home surrounded by his wife and children.
A Mass of Christian Burial will be held at 10:30 a.m. Saturday, Feb. 20, 2021, at Holy Family Parish, New Hampton, with Rev. Brian Dellaert celebrating the Mass. Please join the family live on the Hugeback-Johnson Funeral Home Facebook page.
Friends may greet the family 4 - 7 p.m. Friday, Feb. 19, 2021, at the Hugeback - Johnson Funeral Home & Crematory in New Hampton where there will be a 7 p.m. parish scripture service. Visitation continues an hour prior to the Mass at the church on Saturday. Online condolences for the Martin family may be left at hugebackfuneralhome.com
Robert, or Bob to most who knew him, was born in Calmar, IA on May 14, 1942, to Gladys (Nelson) and Veston Martin, and he was the eighth of nine children.
He grew up in Calmar and attended Calmar High School, which became South Winneshiek High School, where he excelled at any sport in which he participated, especially football and track. He was an outstanding quarterback and a school-record holder in several sprints, but Bob was more than just an athlete. He had the voice of an angel and was invited to sing at the prestigious Dorian Festival at Luther College. He shared his vocal talents throughout his life, beginning when he was 10 years old, continuing at many weddings (including his own and his children’s), and most recently in his parish in Rochester.
Bob graduated from high school in 1960, and although he had been offered a football scholarship by Upper Iowa University, he had three brothers who lived in the San Jose, California, area, so Bob and his best friend, Walt Hruska, decided to take the train out west and go to school at San Jose State. To help support himself through college, Bob worked in the circulation department at the San Jose Mercury News, where he was working on Nov. 22, 1963, the day President Kennedy was assassinated and for years, one of his prized possessions was the scrapbook he made detailing that day through the “extras” the Mercury News published.
Bob eventually ran out of funds and had to give up his dream of a college diploma and was drafted into the U.S. Army — serving his country in Texas and Louisiana. He received his honorable discharge in 1966 and returned to Calmar, intending it to be a “visit” but he ended up staying.
In the early 1970s, he was out with friends at a local tavern, where he played the most important foosball game of his life. His opponent was Pat Costigan, who had loaned Bob her “Carpenters” album so he could practice for a wedding; Pat gave him a hard time about not returning the album. This didn't stop the young couple from dating, falling in love and after a whirlwind courtship, the two were married on July 21, 1973.
The couple moved to Rochester where they lived for three years and welcomed their first child, Erin. In 1976, the family moved to New Hampton, IA, where Bob accepted the assistant manager position at C & H Lumber. In 1978, Bob and Pat completed their family with the birth of their son Casey, and in 1990, Bob began a 22-year career in plant operations for healthcare facilities, including St. Joseph Community Hospital and the Ossian Senior Hospice.
Bob was raised a Methodist, but when Erin was 7 years old, he decided that he would take the Catholic Church’s “First Communion” class with his daughter, and the two celebrated the big day together. Bob was an active member of St. Joseph’s Parish, New Hampton, serving on the Parish Council and sharing his vocal talents as a frequent cantor and soloist.
He was also incredibly civic-minded and served on the New Hampton City Council for 16 years before serving two full terms and part of another as mayor of the city he called home. Bob considered it a privilege and an honor to be involved in city government, and he treated his constituents and city employees with the utmost respect.
Bob’s best chapter, though, began in 2006, when he gained the title of “Papa” with the birth of the first of his five grandchildren. Oh my, how he relished his time with his grandchildren — buying them lottery tickets, treats, lots of nightcrawlers, and attending every sporting event and dance recital he could. His happiest place was in a boat with friends and family, with a fishing pole in his hand and the sun in his eyes.
Bob lived life to the fullest, and he put together a lifetime of good days, and while he will be dearly missed by his wife, his two children, those five lucky kids who had the best “Papa” in the world, his friends and the communities he served so well for so long, they are grateful that he is pain-free and serving his new community of Heaven as he did his communities here.
He is survived by his loving wife of 47 years, Pat, of Rochester, MN; his daughter, Erin Martin and her husband Dan Bochmann and their children Thatcher and Joe of Rochester; son, Casey and his wife Tasya and their children Lila, Rosa and Checka of Richfield, MN; two sisters, Lois Rausch of Fort Atkinson and Mary Lou Huber of San Jose, CA; one brother, Monte (Jean) Martin of Ossian, IA; sisters-in-law, Martha Martin of San Jose, CA, Vera Martin of Chesnee, SC, Molly Hormann of Decorah, Peg (Tom) Hove of Cresco; Brothers-in-law, Duke Hinker of Cedar Rapids, IA, Mike (Kate) Costigan of Conover, IA, Phil (Marguerite) Costigan of Caledonia, MN.
He was preceded in death by his parents Gladys and Veston Martin; In-Laws John and Lila Costigan; brothers Ray Martin, Richard Martin, Harold (Swede) Martin, John Martin, and sister Janet Hinker.