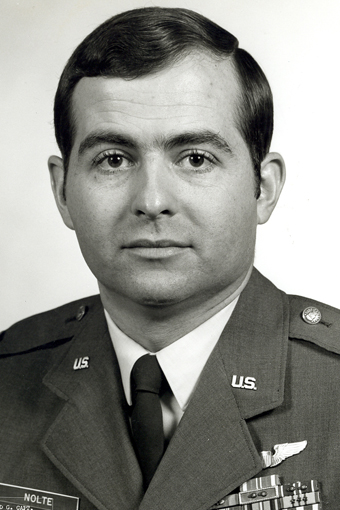 Ronald G. Nolte, age 78 of Waucoma, died Tuesday, July 2, 2019, at his home.
A Mass of Christian Burial was held at 10:30 a.m. Monday, July 8, 2019, at St. Mary’s Catholic Church in Waucoma with Rev. Aaron Junge celebrating the Mass. Interment will be held at St. Mary’s Catholic Cemetery, Waucoma.
There was no visitation held prior to the Mass. Hugeback-Johnson Funeral Home in Waucoma are entrusted with arrangements.
Online condolences for Ronald’s family may be left at hugebackfuneralhome.com.
Ronald Nolte was born on Apri 12, 1941, the son of Alois and Catherine (Korzendofer) at St. Joseph’s Hospital in New Hampton.
He received his education at St. Mary’s, Waucoma, and graduated as the salutatorian from Waucoma High School in 1959.
He attended Upper Iowa University and was a 1996 graduate of Iowa State University.
Ronald enlisted in the Air Force on Sept. 9, 1966, and was commissioned as a second lieutenant on Nov. 25, 1966, at Lackland Air Force Base in Texas. He graduated from Pilot Training School in February 1968 at Vance Air Force Base in Oklahoma and attended several advanced pilot training schools after that year.
As a co-pilot, pilot and aircraft commander, Ronald flew more than 1990 combat missions in Vietnam between August 1968 and January 1970. He also was stationed in Europe in the early 1970s.
He was “separated” from active duty as a captain in February 1972 and honorably discharged from the service on Aug. 25, 1986.
During his military career, he received the Distinguished Flying Cross, the Air Medal, five Oak Leaf Clusters, the Vietnam Service Medal, the Air Force Expeditionary Medal, the Air Force Outstanding Unit Award, the National Defense Service Medal, the Small Arms Expert Marksmanship Ribbon and the Repulic of Vietnam Service Medal.
He worked as a grain merchandiser for Pillsbury for two years, before returning to the family farm in 1974 after his father’s death.
Ronald was a lifetime member of the Iowa State University Alumni Association, the Iowa VFW and the St. Mary’s Parish.
He is survived by his nephew, Dan (Chris) Hageman of Austin, Minnesota; niece, Kathy Hageman of Atlanta, Georgia; nephews and nieces, Nicholas, Caleb and Rylee; and brother-in-law, Leonard Hageman of Lawler.
Ronald was preceded in death by his father in 1974; mother in 2003; sister, Marilyn Hageman in 2015; and many fellow military pilot friends.