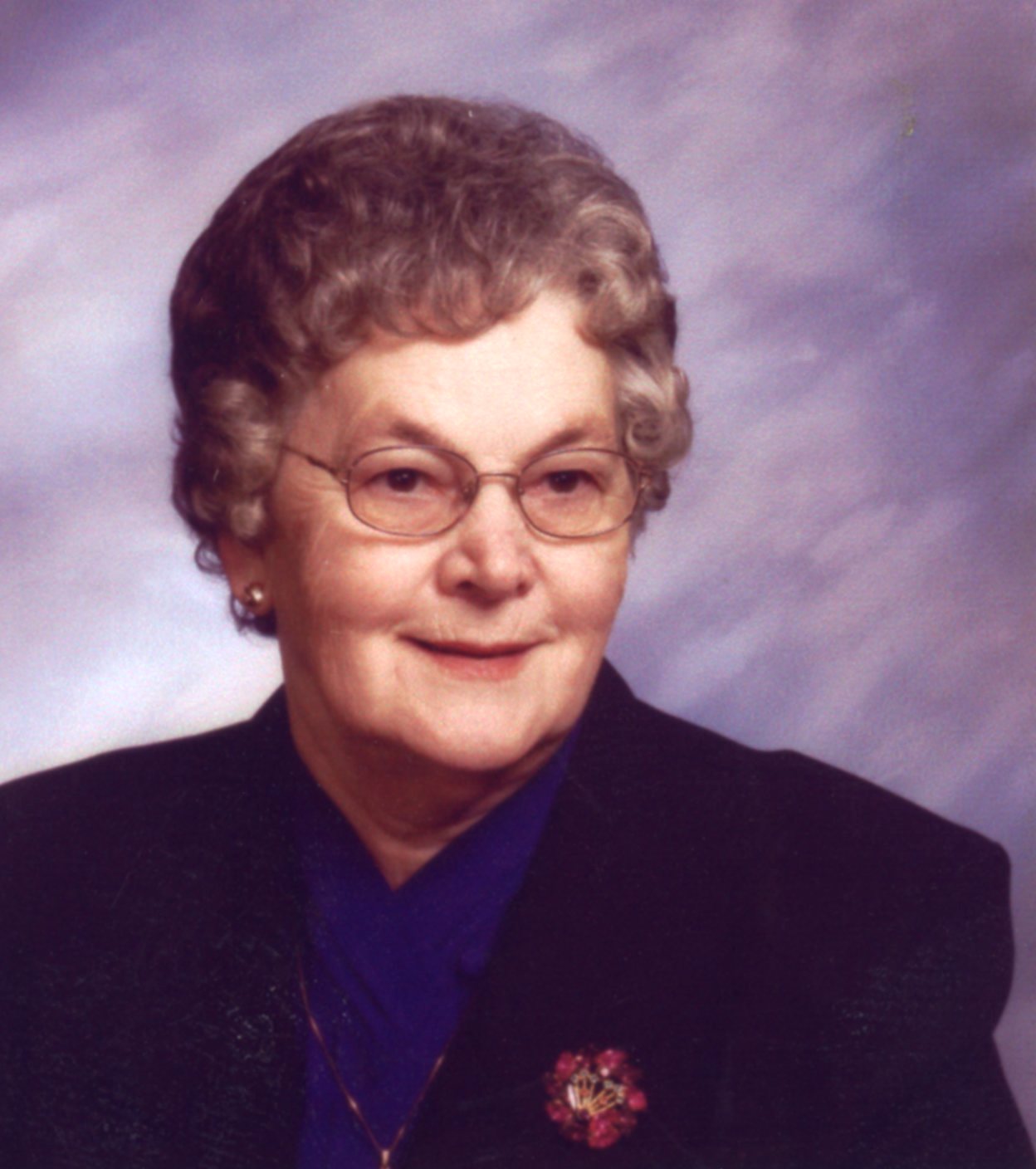 Vera Barbara Kriener, age 91 of Lawler, died Monday, Aug. 2, 2021, at her home.
A Memorial Mass will be held at 10:30 a.m. Tuesday, Aug. 10, 2021, at Our Lady of Mt. Carmel Catholic Church in Lawler with Rev. Nick Radloff celebrating the Mass. For those unable to attend in person please join live on the Hugeback - Johnson Funeral Home Facebook page. Inurnment will be held at St. Rose Cemetery, rural Waucoma.
Friends may greet the family from 4:00 - 7:00 p.m. Monday, Aug. 9, 2021, at Our Lady of Mt. Carmel Catholic Church in Lawler. Visitation continues an hour prior to the Mass at the church on Tuesday.
Vera’s remarkable life began on July 28, 1930, the day she was welcomed to the world by her parents, Nick and Rosalia (Imoehl) Hageman, on the Hageman family farm near Festina.
She was one of 11 children and grew up on the farm while attending school in Festina. Like many who grew up in that era, Vera learned the value of hard work and the importance of family bonds — lessons she emulated for the rest of her life.
Vera met a young man named Greg Kriener at a dance, and the two hit it off, began dating and fell in love. They were married on Aug. 17, 1948 at Our Lady of Seven Dolors Church in Festina.
The couple began their married life on a farm located near Waucoma, and the Kriener family grew to include 10 children — Rosalyn, John, Elaine, Eugene, Joyce, Leroy, Richard, Carl, Mark and Ann — who grew up with a mother who was the best “helper” — whether it be making sure food was ready for the guys in the fields, helping with chores, driving the baling tractor, growing the most beautiful flowers, creating and giving away her fine quilts, tending to her two huge gardens, canning and freezing produce, cracking nuts in the winter and providing support and love to her husband and her children.
Vera and Greg loved to play cards and were part of a card club that included 16 couples who would gather at each other’s homes — often filling three rooms with card tables — at least once a month to not only play cards but laugh and enjoy each other’s company.
At the same time, anyone who knew Vera knew she liked to win. She had a competitive streak — be it in a euchre or 500 card game or playing a board game with her children and later, her grandchildren and great-grandchildren. Her kids will tell you that “Mom wanted to win.”
One of her favorite memories came in 1973 when the Krieners celebrated their 25th anniversary with their first “big” trip as they took a weeklong vacation to Hawaii. Vera always chuckled when asked about the trip because Greg’s suspenders set off the security alarm, but Vera and her husband immensely enjoyed their trip before returning to the farm where they worked right up until Greg’s death in 2003.
Vera was a woman of deep faith who belonged to St. Mary’s Catholic Church in Waucoma for many years before transferring her membership to Our Lady of Mt. Carmel Catholic Church when she moved to Lawler in 2009. She was a 50-year member of the Catholic Daughters of the Americas, an organization where she made countless lifelong friends.
Mostly, though, Vera’s life revolved around her family — one that grew exponentially over the course of her lifetime. At the time of her death, she had 22 grandchildren, 29 great-grandchildren, with three more on the way. and one great-great-grandchild. She would do anything for them, and even at the age of 90, when she had trouble walking from room to room, she would robustly pick up one of her “greats” off the floor if they needed her.
After Greg’s passing, she loved to travel to visit her children, grandchildren, and “greats.” She was always “game” for a trip, and her face always lit up when she arrived. Her children and their children were her proudest achievements.
In short, she lived an extraordinary life — one filled with love for her family and her faith — and as difficult as her passing is for those who remain, they know that Vera is reunited with her husband of 55 years, her daughter, and the legions of family and friends who went before her. And they know that Vera is probably enjoying — and definitely doing everything she can to win — a card game in Heaven.
Vera is survived by her six sons, John (Sue) Kriener of Omaha, Nebraska, Eugene (Amy) Kriener of Burlington, Wisconsin, Leroy (Kris) Kriener of North Liberty, Iowa, Richard (Jean) Kriener of Eau Claire, Wisconsin, Carl (Mandy) Kriener of Waucoma, Iowa, and Mark Kriener and special friend Judy of Lawler IA; three daughters, Elaine (Jim) Brincks of Harvard, Illinois, Joyce (Don) Brincks of Ossian, Iowa, and Ann (Roger) Balk of Sawyer, North Dakota; 22 grandchildren; 29 great-grandchildren; and one great-great-grandchild; one brother, Victor (Elaine) Hageman of Des Moines, IA; three sisters, Lucille Kruse of Urbandale, Iowa, Delores Kuennen of Sumner, Iowa, and Sister Joan Hageman of La Crosse, Wisconsin.
She was preceded in death by her parents; husband, Gregory in 2003; one daughter, Rosalyn Kriener; two sisters, Florentina Hageman, Rita Wenthold; four brothers, Ermin, Quinton, and Edwin Hageman and a brother in infancy.