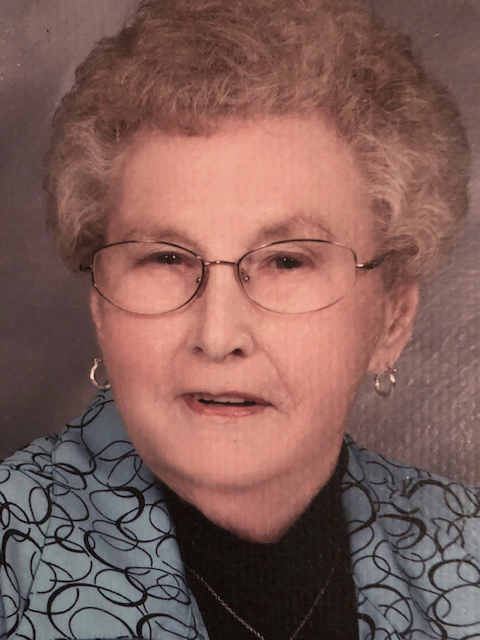 Virginia Lea Blietz-Kotz, age 95 of Marshalltown, formerly of New Hampton, passed away on Jan. 24, 2021, at Accura HealthCare in Marshalltown.
Funeral services will be held at 1 p.m. on Friday, Jan. 29, 2021 at Conway-Markham Funeral Home with Pastor Kevin Frey officiating.  Burial will be in the New Hampton Cemetery.  Visitation will be one hours prior to the service.
Memorials will be directed to the Carnegie Cultural Center, Senior Center or Iowa River Hospice of Marshalltown.  Please join the family via Facebook live on Conway-Markham Funeral Home’s Facebook page at 1 p.m. on Friday, Jan. 29.
Virginia was born on Oct. 8, 1925 in rural New Hampton, the daughter of John A. and Tina (Stansbery) Slick.  She was born the youngest of 7 siblings.  She attended New Hampton Elementary and High School graduating in 1943.
On July 24, 1945 she was united in marriage to Glen R. Blietz at the First Baptist Church in New Hampton.  To this union two children were born, Glenda and Allen G. Blietz.  Virginia worked several places in New Hampton including two TeKippe’s stores and the Main Diner café, and she retired from the United Telephone Company in 1980 after 25 years.  After retirement, she became a full-time caregiver for Glen for 18 years.
Virginia was a member of the First Baptist Church in New Hampton, where she was an active member of the Amoma and Mission Circles and assisted with Vacation Bible School, the Olympics, and the Giving Tree.  In 1988 she was named 'Woman of the Year’ by the Business and Professional Women (BPW), where she was a member.  Virginia greatly enjoyed helping others, volunteering in a number of ways at the Senior Center, both Nursing Homes, and the Carnegie Center in New Hampton.  She also belonged to the Trinity Lutheran Quilting Circle.
Throughout her life, Virginia treasured time with family and friends.  She was known to always enjoy a good spirited card game, playing bingo, gardening, and baking.
Virginia and Glen did a lot of traveling and enjoyed camping and fishing.  Virginia has been to Canada, Mexico, Germany and every state except Louisiana and Alaska.  They enjoyed a wonderful life together until Glen passed away in 1997 from MS.
Virginia expanded her family when she married Wilbur A. Kotz on Dec. 16, 2000.  Together they lived southwest of New Hampton.  Wilbur passed away in 2008.
Virginia is survived by her children Glenda (Roger) Hackman of Marshalltown, Iowa and Allen G. (Eva) Blietz of Glen Rock, Pennsylvania; grandchildren Shawn Hackman of Las Vegas, Nevada, Tonia (Dave) Petrie of Pahrump, Nevada, Dawn McKinley of Schaumburg, Illinois, Allen S. (Jennifer) Blietz of Stewartstown, Pennsylvania and Adam (Amanda Kokus) Blietz of Windsor, Pennsylvania; five Great-Grandchildren Alexis Blietz, Makalea Petrie, Hayden Petrie, Kate McKinley, and Cole McKinley; step-children Tom (Michele) Kotz, Patsy Fickbohm, Robb (Cindy) Kotz, Kate (Mark) Van Tassel, and Sue Kotz; step-daughter-in-law Barb Kotz and step-son-in-law Rick Kruger; 13 step-grandchildren; and 17 step-great-grandchildren.
She was preceded in death by her parents; husband Glen (1997); husband Wilbur A. (2008); 4 brothers Lyle Slick, Ronald Slick, and 2 boys in infancy; 3 sisters Myrtle Zipse, Evelyn Rodberg, and 1 girl in infancy; and step-children Wilbur E. Kotz, LaLonna Kotz and Merry Kruger.