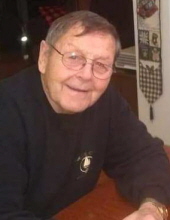 William "Bill" Hurd, age 87 of New Hampton, died Thursday, June 24, 2021, at the Patty Elwood Center in Cresco.
A Mass of Christian Burial will be held 10:30 a.m. Tuesday, June 29, 2021 at Holy Family Parish with Rev. Brian Dellaert celebrating the Mass. Interment will follow at Calvary Cemetery in New Hampton.
Friends may greet the family from 4:00 - 7:00 p.m. on Monday, June 28, 2021 at Hugeback-Johnson Funeral Home & Crematory in New Hampton where there will be a 7:00 p.m. Parish Scripture Service. Visitation continues an hour prior to the Mass on Tuesday at the church.
In lieu of flowers please designate your memorials to the Lawler American Legion Post #279.
William E. Hurd was born on Jan. 15, 1934, to Thomas and Lillian (Jirak) Hurd in Lawler, and he grew up on farms in the Lawler and Jerico areas.
Like most boys from that era, Bill helped his parents with chores on the farm, learned the value of a great work ethic and attended country school through the eighth grade before helping his parents full-time on the farm.
He enlisted in the U.S. Navy, serving on a number of ships, including the USS Leonard F. Mason. With Hurd aboard, the Leonard F. Mason served in the western Pacific and helped bring an element of security to the turbulent Japan, the Philippines and the rest of the Far East that was turbulent during the 1950s.
While home on leave, Bill met Joanne Krall at a dance in Lawler, and it was virtually love at first site. When Bill returned to duty in California, Joanne wrote him a letter every single day and Bill always said he knew he had met a “keeper.” The two were married on April 27, 1957, at St. Joseph’s Catholic Church in New Hampton and began their married life on a farm north of Lawler.
The couple was blessed with seven children — Michael, Steve, Christopher (who died in infancy), Lisa, Barb, David and Sara. The Hurd kids had a father who was a hard worker and who didn’t believe in throwing anything away. If it could be fixed — often with his favorite tool, duct tape — Bill fixed it. The Hurds ran a dairy operation for years and seven days a week — morning and evening — they milked their cows, but Bill also was the kind of dad who always made time for his kids. He’d milk early on Friday nights, for example, so that he and Joanne could make the kids’ games.
Bill was a child of the Great Depression, and with a large family, money was tight, yet he always found a way to do special things for his kids. They remember the trips they took to Disney World and to Washington, D.C. — two parents, five kids and a station wagon — fondly.
Bill and Joanne farmed until 1979, when they moved into New Hampton, where he took a job with Sara Lee before eventually becoming the maintenance director at the city’s hospital, a post he held until his retirement.
Bill loved to go dancing with Joanne, be it at the Inwood Ballroom in Spillville, Chip’s in Lawler or any other place that had a dance floor. The Hurds liked to camp, loved to play cards (especially Euchre) and travel.
Joanne and Bill never lost their love for dancing; in fact, almost every Saturday night, they’d hire two babysitters and head to the Inwood Ballroom, Chip’s Ballroom in Lawler or another ballroom in Northeast Iowa for wedding dances.
He served on the New Hampton City Council for 14 years, and oftentimes, he was the council’s “voice of reason.” He believed in coming up with solutions to issues that not only addressed issues the city was facing but also did so in a fiscally responsible way.
Bill had 14 grandchildren and 19-great-grandchildren, and he was, to put it simply, a “great papa.”
He was a member of Holy Family Parish, the Knights of Columbus and the Lawler Harold Redman American Legion Post 0279. He was proud of his service to the country, and he was even more proud of his fellow men and women who answered their nation’s call.
Bill leaves behind a legacy as a family man, a veteran and one who served his community long and well, and he will be terribly missed by his children, his grandchildren, his greats and legions of friends, but they are comforted by the fact that today, Bill and Joanne are reunited on a ballroom dance floor in heaven.
Bill is survived by two sons, Michael Hurd of Calmar, Iowa, Steve (Theresa) Hurd of Campbellsport, WI; three daughters, Lisa (Jeff) Merry of Plymouth, MN, Barb (Charlie) Watson of White Bluff, TN, Sara (Michael) Ealy of Holiday, FL; 14 grandchildren; 19 great-grandchildren; one sister-in-law, Karen Krall of New Hampton.
He was preceded in death by his parents; his wife, Joanne on February 28, 2020; two sons, Christopher and David Hurd; one brother, James (Marie) Hurd; two sisters, Norma (Alger) Amble, Leona (Calvin) Johnson.